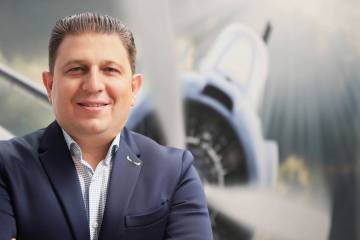 “If there is pessimism, we’re not experiencing it in our interactions,” he said. “U.S. companies seem to be taking a cautious approach, and we don’t anticipate any extreme movement until after the U.S. [mid-term] elections. Our clients still demand the same high standards and are not willing to compromise on their operations safety, security, efficiency, or flexibility.”

Many of the newcomers to business aviation post-pandemic are passengers opting for more safety and efficiency and to escape inconvenience at airports, Al Husary believes. Airline flight cancelations and airport congestion have also been major contributors to an increase in demand for business and private jets, and this will continue as the Covid-19 situation and its repercussions continue to cause staff shortages at both airlines and airports.

“A more long-term economic slowdown and higher interest rates could tamp down the record demand slightly but given the lead time to acquire the assets, unless there is a significant downturn, demand should remain fairly strong,” he said.

According to Al Husary, supply chain disruptions to OEM output had been exacerbated by the Russia-Ukraine War. “The industry is still experiencing delays and supply shortages due to supply chain issues, whether for aircraft or parts. And, of course, it is creating headaches for stakeholders globally,” he said. “There has never been so much more demand than there are aircraft, and it is frustrating for some charter brokers not to be able to offer their clients as wide a choice as they would like.”

He said the new and preowned business aircraft segments remain strong, with both sectors reporting robust demand. “Our understanding is that a significant amount of movement has been with the preowned market due to delivery delays reported with OEMs,” he said. “We have experienced an increased number of deliveries to the U.S. from overseas to help fill the demand. Undoubtedly, fractional ownership is a growing trend, while corporate jets are also extremely strong and showing positive sustainability.”

One development he identified as being unhelpful was the number of illegal charters operating internationally into the U.S., claiming they operated under the Federal Aviation Regulations for fractional-ownership schemes. Part 91 Subpart K governs these operations.

“According to our Americas team, there are currently only 10 true fractional operators that are legally bound under Part 91K. [Recently], U.S. Customs and Border Protection (CBP) began the penalty phase for three charter providers in three days and intercepted a fourth. Many of these operators ‘port shop’ clearance locations and are often found to have coached their passengers as to what to tell CBP officers during inspections. It seems the CBP is making a great effort to reign in these illegal operators.”

A clarification from a UAS spokesperson explained that “port shop” refers to operators calling around to various customs airports to see who will “accept” them for clearance. They specifically are looking for locations that do not necessarily follow the rules, allowing operators to evade certain processes.

UAS launched its Americas headquarters in Houston, Texas, nine years ago, and since then its operations team has been supporting clients in North and South America through its global network. More recently, it has expanded its teams of on-site supervisors across airports in the U.S., Mexico, Brazil, and Colombia.

“Demand for this type of dedicated support is on the rise because current travel conditions have created shortages in many FBOs and airports,” he said.

He claims UAS’s latest advanced technology—Global Trip Manager (GTM)—is the fastest, most powerful trip management system on the market. GTM provides real-time updates and information on all service requests globally, so operators have the power to manage their trip-planning needs, as well as their company profile, including personnel, contacts, fleet, and documentation.

GTM features include real-time tracking of requests, on-demand flight status checks, flight briefs, fuel releases, and operational and technical information for airports worldwide. “It’s been designed to give the user something they have never seen before, as well as more power and more freedom,” he said. “It can overcome the major and minor pain points that operators experience and give them total and immediate control of trip planning activities in the most comprehensive way yet.”