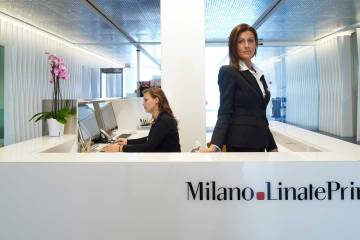 Milan, Italy-based SEA Prime’s FBO facilities at Linate and Malpensa airports saw a 42 percent year-over-year increase in business aircraft movements in the first eight months. This also represents 154 and 29 percent increases from the same periods in 2020 and 2019, respectively.

“Last year, we saw more than 27,000 movements at the two airports combined and we expect to reach over 30,000 movements this year,” said SEA Prime CEO Chiara Dorigotti. The company operates these airports under its Milano Prime brand.

“January to August is looking extremely good and [we saw] a good September because of all the events happening in Milan,” Dorigotti said. “At the Formula 1 Grand Prix on September 9 to 12, reported increases in the number of race spectators over the weekend—336,000, compared with 200,000 in record-year 2019—were accompanied by an increase in movements managed by SEA Prime of 54 percent compared with 2019, while 75 percent of managed air traffic was international.”

Dorigotti also expressed pleasure with the turnout at EBACE 2022. “It was well attended,” she commented. “We were happy to meet in person as we did in the U.S. in April at the NBAA schedulers and dispatchers event in San Diego. This was our first business aviation-related event in some time. In fact, we were also in Dubai in November 2021 for the airshow, which attracted a lot of business aviation exhibitors.”

Milano Prime claims to be an important gateway to international and sporting events in Milan, which include soccer’s Champions and Nations Leagues and basketball’s EuroLeague. Milan Fashion Week took place at the end of September, alongside other fairs like shoe-design event MICAM.

“Even though fuel prices and economic and political uncertainties may have a potential impact, we expect to close this year with solid double-digit growth,” Dorigotti said. “We are looking very carefully at higher fuel prices and war-related uncertainty. In terms of traffic trends, in 2021 we have seen a slight change, in the sense that, versus last year, we have had more international and less domestic traffic.

“We’ve been seeing more intercontinental traffic,” she continued. “Flights from and to North America are up 200 percent versus last year.”

Regarding airport operations, a shortage of personnel has impacted business in general in Italy. Regulations on employee subsidies meant people were, for the most part, not actually laid off but frozen in furlough schemes. However, handlers have managed to get their personnel back.

“As a result, we have not seen meaningful operational challenges,” Dorigotti remarked. “We can manage traffic well, and fuel is available. The fact that business has recovered has not impacted numbers, but it’s impacted the mix. Domestic flights have decreased because more people are traveling abroad due to easing restrictions on international travel.”

SEA Prime’s growth remains higher than Europe’s, overall. Citing WingX data, Dorigotti said Europe had been growing at 18 percent this year through July. “In comparison, we have been growing at 35 percent,” she noted. “Milan is still the key business aviation airport for traffic in Italy today. In July, Italy was Europe’s third-largest market. Inland represents a significant share. Of course, in August, we saw a lot of traffic in holiday locations, like the islands or the south.”

Linate has higher traffic volumes; Malpensa Prime has fewer flights, but bigger aircraft sizes. Malpensa is more of an inbound airport, typically for traffic from North America and the Middle East, being close to Lake Como and Lake Maggiore.

“We also see bigger aircraft around Malpensa Prime because they have two runways that can accommodate BBJs and ACJs,” Dorigotti said. “When we designed it, we targeted a different type of traffic. It’s also very close to Switzerland and Lugano [Italy] and to a number of winter sports destinations in northern Italy. In Malpensa Prime, we also host a number of flights, particularly for sports teams, and music bands, through our dedicated VVIP Prime Fast Track service.”

The sole FBO operator in Milan, SEA Prime’s ownership is a public-private mix. It is held 100 percent by the commercial airport manager at Linate and Malpensa, SEA, the second-largest commercial aviation operator in Italy. In turn, SEA is 51 percent owned by the municipality of Milan, with the balance being held by private equity funds 2i Aeroporti SpA and F2i Sgr SpA.

Immediate expansion plans put infrastructure at the focus of development. SEA Prime runs 10 hangars in Linate Prime and a large one at Malpensa Prime. It is adding an 11th at Linate, a maintenance hangar consolidating and expanding the Bombardier authorized service facility managed by Directional Aviation Group’s Sirio. Two more are planned to be ready in time for the Olympics being hosted by Milan in 2026.

Longer term, Dorigotti said, operators required a concession from the government to be eligible to be airport managers in Italy. Its indirect shareholder owns other Italian airports, including Naples, Olbia, and Turin. “In my view, it could be interesting to develop a network of business aviation airport managers exploiting commercial and operational synergies,” she said.

“There is definitely organic growth potential where we are, in Milan, our focus today,” Dorigotti concluded. “However, if new opportunities materialize, and if tenders are issued, we will look at them. Our shareholders will ultimately decide growth strategy and capital allocation, but, we will be potentially active if opportunities arise in Italy and, potentially, abroad.”