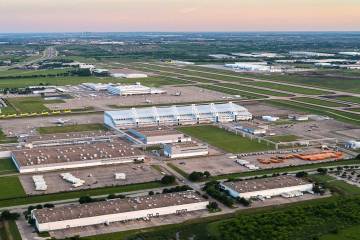 KAFW, which opened 33 years ago this month, was the world’s first airport designated specifically for industrial use. Named after H. Ross Perot—the late industrialist, billionaire, politician, and philanthropist—it was created in a collaboration between Perot Group real estate arm Hillwood, the city of Fort Worth, and the FAA. KAFW hosts a wide variety of operations including cargo, corporate, and government aviation, and is the cornerstone of the 27,000-acre AllianceTexas development.

“My dad wholeheartedly believed Fort Worth Alliance Airport would be the centerpiece of an unprecedented jobs corridor in Texas,” explained Ross Perot Jr., chairman of the Perot Group and Hillwood. “Investing in the northwest corner of the Dallas-Fort Worth metroplex mattered to him, and he immediately saw its potential.” He added that development at the site, one of the “great Texas business stories of our day,” is “only halfway through” and will continue for at least another generation.

At the event, plans were unveiled for the construction of Perot Plaza, a memorial on the west side of the airport’s control tower, which when completed, will feature a statue of Perot Sr. The airport also just debuted its newly constructed FBO.