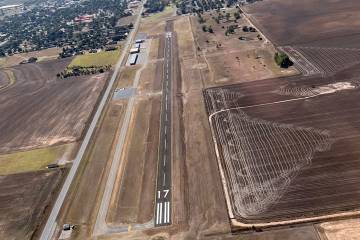 Oklahoma’s Watonga Regional Airport (KJWG) held a ribbon-cutting ceremony today for the reopening of its 4,000-foot Runway 17/35 after it underwent a five-month-long reconstruction project, its first in more than a quarter-century. The $2.8 million pavement rehabilitation effort, funded entirely with FAA grants, also included the installation of LED runway edge lighting and an obstruction survey to develop new instrument approach procedures aimed at providing 24/7 access to the airport in all weather conditions.

KJWG, which generates more than $1 million annually, is used by oil and gas companies and is home to several agriculture aviation operators that provide services such as crop spraying. With much of the state’s population concentrated in the urban areas of Tulsa and Oklahoma City, airports such as KJWG that serve smaller communities also provide access to essential services such as aeromedical care and airborne law enforcement.

“With this completed runway project, the city is now set for growth opportunities. And with aviation and aerospace as the state’s second-largest economic engine, Watonga is positioned to help further the state’s aero commerce and tourism efforts,” said Oklahoma transportation secretary Tim Gatz.