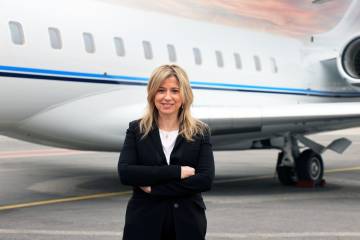 Milan, Italy-based FBO operator SEA Prime (Stand 432) said the Middle East region continues to be an important catchment area for its business. “Inbound and outbound traffic from the Middle East, and in particular Dubai, has historically been very strong at Milano Prime due to the strong attraction of Milan for that region and vice versa,” CEO Chiara Dorigotti told AIN, adding that the FIFA World Cup in Qatar is amplifying this traffic.

She said that SEA Prime, and its brand Milano Prime, exhibiting at MEBAA allows the company “to develop and consolidate relationships with partners operating in that area.” Year-to-date, traffic to and from the Middle East region into SEA Prime’s facilities increased by 13 percent versus 2019, with the UAE alone seeing a 24 percent rise over the same period.

Movement performance at SEA Prime’s FBO facilities at Linate and Malpensa airports has remained strong as the year draws to a close. “Overall traffic at Milano Prime in 2022 continues to be very healthy,” Dorigotti said. “In October, we saw an increase in traffic of 25 percent compared to 2021, and 37 percent versus 2019. We expect to reach over 30,000 movements in 2022.”

As evidence of the importance of Milano Prime’s customer base, Gulfstream showcased its new G700 at Milano Prime in Linate on October 28.