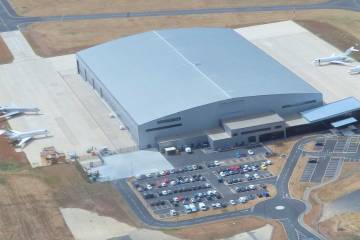 London Biggin Hill Airport—the UK capital’s number-two business aviation hub—has exhibited at NBAA–BACE for many years, using it to promote its offering to VIP aircraft owners and operators. Robert Walters, Biggin Hill’s commercial director, calls transatlantic flights “a relatively small but growing portion” of the traffic at Biggin Hill, but said they account for a “healthy share of long-range aircraft movements to the site.”

Heavy investment in the airport—a former wartime airbase 18 kilometers (11.2 miles) from central London—has been a driving force behind Biggin Hill’s appeal to domestic and international business aircraft travelers. “Our vision for the airport is bold,” Walters noted. “But we are committed to providing high-end services for the business aviation community and retaining our position as one of the leading business aviation hubs not only in the UK but in Europe, too.”

Today, Biggin Hill and rival Farnborough Airport—London’s top business aviation hub located 55 kilometers southwest of London—account for more 50 percent of corporate aircraft traffic coming into the British capital, Walters noted. Moreover, Biggin Hill is on track to record its strongest year ever in 2022 with more than 26,000 movements expected by year-end. This smashes the airport’s previous record of around 19,000 takeoffs and landings in 2019.

Walters attributes some of this success to Biggin Hill’s decision not to shut down during the Covid pandemic. This, he explained, helped to magnify the benefits of business aviation airports over their commercial aviation counterparts. “The pandemic provided a kick-start for Biggin Hill rather than a brake and also magnified both the resilience and the benefits of our industry,” said Walters.

Contributing to its success are first-time entrants to the business aviation market. Stymied by the commercial airlines, many travelers who could afford the expense opted for the ease of turning up at a private terminal and boarding an aircraft that they regarded as a more Covid-safe environment that a commercial airliner.

“Even when lockdown restrictions were lifted, international carriers began canceling flights at short notice and withdrawing unprofitable routes,” said Walters, “so many of their previously loyal passengers who needed a reliable form of air travel for leisure or business made a permanent switch to private aviation.”

Heavy investment in the site has also played a pivotal role in attracting business. “We have made great strides in a remarkably short time,” Walters claimed. “If you look back just five years, we are a completely different airport. Gone are the general aviation movements; now Biggin Hill is solely dedicated to business aviation.”

Infrastructure development has taken center stage in the airport’s strategic game plan, with the aim of attracting not just business aircraft travelers to Biggin Hill, but also tenants that can offer high-quality, third-party services.

Located on the east side of the airport, Bombardier’s new base—which has opened for business, but will be officially inaugurated in November—consists of 650,000 sq ft of apron space and a 250,000-sq-ft hangar that can house 14 ultra-long-range Global 7500s simultaneously.

At EBACE in May, it was announced that Dubai-headquartered Jetex will replace Signature as the tenant of the VIP terminal section of the building. The rebranded facility is set to open by next month.

Meanwhile, Biggin Hill’s on-site hotel is scheduled to open in January. Called the Landing, the four-star, 56-guest-room facility, located next to Hangar 510 on the perimeter of the airport, will largely accommodate overnighting crews, engineers, and other professionals visiting the airport.

Other infrastructure plans include the construction of a third airport-owned hangar with building work scheduled to begin in second-quarter 2023. Biggin Hill opened its second hangar, a 64,600-sq-ft structure, in 2018.

Work on a £4 million ($4.5 million) hangar development project for Oriens is scheduled to begin in the coming weeks. The facility will house MRO services for its Pilatus and Tecnam aircraft customers.

Castle Air, which operates a popular helicopter shuttle to central London, is expanding its maintenance facility, and there are plans for a VIP terminal to replace the existing 1950s-era main airport building. “We are at the design stage, but we hope to share details in due course,” said Walters.

The airport’s main taxiway is being resurfaced and expanded to accommodate the extra aircraft at the site, while approval of a new instrument approach for Runway 3—designed to add capability at both ends of its main runway—is imminent.