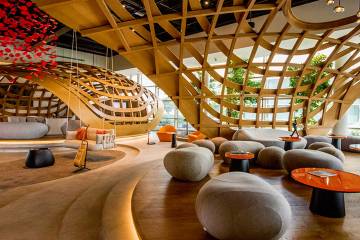 “I don’t intend to enter the U.S. market because it requires strong networking,” he said. “It’s a huge investment and at the moment our intention is clear: we want to limit our focus in the U.S. market mainly to trip planning.”

Jetex employs 700 people and 25 to 30 members of both its U.S. and Dubai teams are in attendance this week at the NBAA show.

Its Opa Locka, Florida trip-support location is seeing growth, according to Mardini. “New clients have joined, especially from Latin America. We are very happy with the expansion going on there. Thanks to system integration, we are adding more aircraft to our portfolio.”

System integrations include its Global Trip Support Manager platform—recently rebranded as NKontrol—a 32-person unit based in the UAE’s Dubai Airport Free Zone. “It is our operations and communications nerve center,” he said. “We have finalized testing [and] we just did a software deal with Poland’s Leon Software. Its reach and coverage make it one of the world’s most successful software companies.”

Mardini added that the NKontrol system optimizes crew scheduling. “The minute the flight enters the Leon system, as their partner it enters ours,” he said. “The customer needs only send an email or reminder and they can check all the details for themselves: building location, permit status, departure time, and flight status.”

The company is adding information every day and recently signed a new charter operator, with 38 aircraft, to its portfolio. It also expects to add 1,200 aircraft to the system before the end of the year. “We are becoming a major client of the charter companies,” he said.

Mardini cites recent statistics, saying 40 percent of new Bombardier customers are first-time buyers, which he sees as a major positive. “That’s a global statistic,” he said. “It’s a very good indication that there’s a new generation, and new people, coming into the industry.”

He also noted increasing pressure from the environmental lobby on the industry and cites a recent example from France, which has called for restrictions on business aviation. “There’s talk of a law to ban private jets; I don’t see it working,” he said.

“Trying to introduce a law in a major location like France to ban private aviation [is unlikely to work]. Nice will see 40,000 flights this year and Le Bourget 60,000. France is number one [for business jets] in Europe. You can’t simply ban the business, but you can try to limit it. You can do carbon offsets, or impose heavier taxes, but ban it when just two of its airports do 100,000 flights?”

Today, Jetex claims a market share at Paris Le Bourget of more than 20 percent. According to Mardini, “Jetex handles around 13,200 movements a year [at that location]. We are number one there, we did over 10,000 flights in the first six months of 2022.”

When AIN met with Mardini on the eve of NBAA–BACE, he said decisions were imminent on its tenders for FBOs at Nice and Abu Dhabi Executive airports. Jetex is also progressing in the UK. At EBACE in May, it announced the opening of a new FBO at Hangar 510 at London Biggin Hill Airport, commencing operations this month. In addition to Biggin Hill, Mardini plans further expansion in the UK market.

Just before Singapore Airshow in February, Mardini told AIN he expected to win 50 percent market share at Jetex’s FBO at Singapore Seletar Airport, which the company manages in conjunction with Bombardier’s MRO facility there.

“Wherever it is, we go in and capture the market,” he said. “Next year, I expect more than 10,000 movements [at Seletar]. There are many players on the ground, including Universal and Jet Aviation. However, I am very positive as we have a very strong team. Every day, our market share increases. We are not limited to Seletar; we are doing a lot of support work at Changi Airport.”

Mardini hinted that he may also apply to open an FBO at Changi, Singapore’s main commercial aviation gateway, given all the work Jetex is doing to service it remotely. “There’s no FBO today at Changi; we think an FBO should be established there to serve general aviation flights and we hope that Jetex will be considered as a candidate to operate it,” he said.

Jetex’s ties to Bombardier could become increasingly important. “For us, it is all about the relationship,” he said. “Strategy-wise, Bombardier is an excellent partner. We have built a very good understanding with them; they needed an FBO operator to partner with them.”

With almost 60 percent of the world’s population living in Asia, Jetex sees it as a natural new market. Singapore is its fourth location in Asia-Pacific, after Haneda and Narita in Tokyo and Osaka, Japan. Elsewhere, he is studying the Indonesian market. “This is my preferred location in that part of Southeast Asia. Vietnam is also very interesting; it’s the future,” he said.

Preparations for the World Cup

This year’s FIFA World Cup will be held in Qatar and Jetex’s preparations are in full swing. The company is advertising match-day air charter packages from Dubai for $65,400 for groups of 10 people to fly round-trip for the games.

Mardini said the company had received strong interest, and, by September, had applied for more than 300 slots or flights for the month-long event. “The Qatari authorities are very organized,” he said. “They are charging a $5,000 deposit per slot, for the timing to Hamad Airport. Based on the route, it will be mainly the Challenger 605 or 300, and the Gulfstream G450—something small, as the flight is only 40 minutes.”

He is keenly aware of the boost his business can receive from the staging of such marquee events. “It’ll be the first time the event is staged in the Arab world—and hopefully not the last,” he said. “Maybe it’ll take another 50 years to return to the Gulf. In 2026, it will take place in the U.S., Canada, and Mexico.

“I believe that in 2030, the hosts could be Morocco, Spain, and Portugal. Jetex has already established a presence in both Spain and Morocco,” he said. “It’s the World Cup, everyone benefits if it is successful. It starts on November 20, only about 30 days away.”

Whatever his clients do, he is keen to attend the World Cup finals himself to assess further opportunities. “I am a huge fan of the sport and I plan to attend the important matches, including the quarter-final, semi-final, and final.”