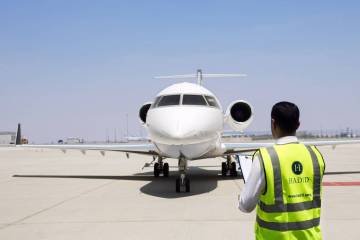 Dubai, UAE-based trip support firm Hadid International Services (Stand 350) has officially joined the governing board of the Middle East Business Aviation Association (MEBAA). “Hadid is a business aviation pioneer in the Middle East, and represents something about the region,” commercial director Issa Zuriqi told AIN. “While we were not a founding member, we always wanted to be a board member.”

MEBAA founding and executive chairman Ali Alnaqbi confirmed Hadid’s appointment. The association was established in 2006 and, although it was set up as early as 1981, Hadid did not become an active partner until 2008. Many employees have left to set up similar and competing concerns, but as the oldest, Hadid remains the most venerable presence in the region’s flight-support sector. It provides international flight planning, ground support, air charter, executive aviation terminals, as well as travel and concierge services, leveraging an international network and relationships with strategic partners and suppliers.