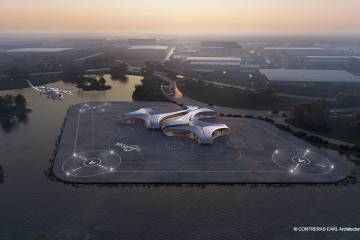 Australia’s Civil Aviation Safety Authority (CASA) this week published draft guidelines on the construction of vertiports to be used by eVTOL aircraft for services such as air taxi flights in and around cities. The agency has invited comments from stakeholders on the guidance covering site selection, physical characteristics, and visual aids, with a closing date of March 31, 2023, for responses.

The regulator is organizing a series of webinars to allow stakeholders to learn more about its plans. These will include the following sessions: introduction to vertiports and the advisory circular (December 8); physical characteristics of a vertiport (January 19); obstacle limitation surfaces for a vertiport (February 2); visual aids for vertiports (February 16).

Earlier this year, Australia’s federal government released A$36 million ($24 million) in funding to support plans to develop the advanced air mobility (AAM) industry in the country. It also published a roadmap to prepare for the introduction of eVTOL aircraft. State governments in Victoria and Queensland have shown a willingness to support AAM development.

Infrastructure developer Skyportz is working to establish vertiports at some 400 sites. Earlier this year, it published a design for a vertiport in the Caribbean Park district of Melbourne, where the company is located.