SPA To Take Delivery of Embraer Praetor 500 Next Year 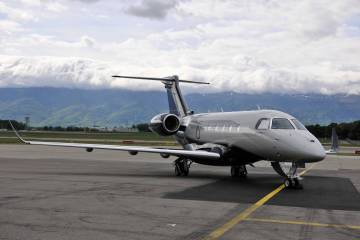 Saudia Private Aviation (SPA, Stand 1125), the Saudi flag carrier’s VIP air charter arm, has placed an order for an Embraer Praetor 500, with delivery set for third-quarter 2023. It also has an option on a second of the midsize business jets, SPA CEO Fahad Al Jarboa told AIN.

“We will be receiving a new aircraft in the third quarter of next year and slowly rebuilding our fleet,” he said. “We postponed some decisions because of Covid, but we will finally have a new aircraft next year. The Praetor 500 is more for regional range. We have the option to take a second aircraft; we may execute another order in the first quarter of next year, pending approvals from our support directors.”

In recent years, SPA has disposed of its legacy fleet of 10 business jets, which included four Dassault Falcons—three 7Xs and a 900—and six Hawker 400XPs, as the aircraft were not well suited to its operations, according to Al Jarboa.

However, he is keen to underscore the company’s progress, despite anecdotal evidence of a lull in private and business aviation in Saudi Arabia following a government move against high-level corruption in 2017. He believes SPA has weathered the storm and emerged stronger from Covid and is well positioned to take advantage of hitherto dormant commercial activities.

“We would like to demonstrate that our company is still as strong as pre-Covid, if not stronger,” Al Jarboa said. “We filled the void, at least in Saudi Arabia, when it came to evacuation and last-minute flying, because during Covid, it was all on an urgent basis, trying to evacuate Saudi nationals or even expats who wanted to return to their countries. We did very well in meeting the demand for charter aircraft. We have also been expanding our FBO services in global flight support.”

SPA also boasts numerous FBOs. “Jeddah and Riyadh are our main focus, with a presence in Dammam, Medina, Jizan, Yanbu, and Neom,” he said.

The company continues to take advantage of ad hoc access to the flag carrier’s full fleet, a “sub-chartering” strategy Al Jarboa explained to AIN in 2019. “We continue to do that. We are the private-charter arm of Saudia; for anyone who’s looking to charter narrowbody or widebody, we have full access to the Saudia fleet that is on standby. Evacuations were performed largely using the Saudia fleet.”

In fact, SPA was able to provide widebody charter to the Saudi national soccer team for matches in Australia and Japan last year, as well as training in a number of countries earlier this year in preparation for the FIFA World Cup in Qatar. “We are the official national carrier on the Saudia 777, likewise, for some of the big government clients,” he said.

As a representative of the flag carrier, SPA is in the best position to take up any new business coming into the market. “We benefit from the economies of scale of Saudia, and because of that, we are able to offer competitive packages to our customers,” he said. “No one can compete with us. On the narrowbody, only NasJet can compete with us, but on the widebody they cannot.”

According to Al Jarboa, SPA’s main client base is local Saudi corporations, with government agencies and private individuals also having the option to travel with Saudi competitor Alpha Star. The latter company has a fleet of nine aircraft: three Airbus ACJ320-family jets, two Gulfstream G450s, two Hawker 900XPs, and an ATR 42-500 and 72-600.

A major focus of Saudi development is the three mega-projects taking place on its northwest Red Sea coast—at Neom, Amaala, and the Red Sea Development Project.

“The projects are coming along nicely,” he said. “Big progress has been made. We are in discussion with the management to be a part of their FBO services. We’re confident we will be taking part in the future.”

He added that high oil prices had underlined the kingdom’s status as a “sleeping giant,” as its coffers swelled to the tune of up to an extra $500 million a day when oil prices peaked due to the Ukraine war. “Now that our crown prince has opened up the country to tourism and business, it’s much easier,” he said. “Saudi Arabia is more accessible. We are reaping the benefits of that.”